Higher education in later decades of life has become an extremely popular topic. As seen in The Wall Street Journal article titled “Seniors Seek Intellectual Buzz,” seniors are looking for convenient ways to expand their education horizons. This concept it a focal part of what we envision for the West Davis Active Adult Community. With rooms within the Wellness Center dedicated to lectures and classes, residents and people of the larger Davis community will have more opportunity for education. 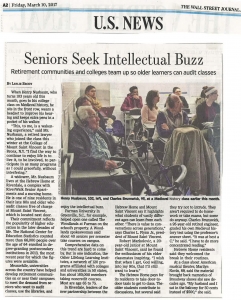 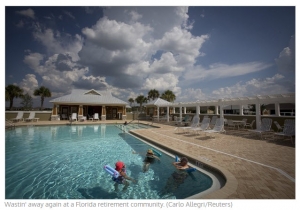 “It’s 5 o’clock somewhere” is now more than a cliché, it’s part of the lifestyle at the Margaritaville themed active adult community in Daytona Beach, FL. This is an age restricted village with nearly 7,000 homes, a retail center and, of course, a bandstand for community events.

To Live and Die in Margaritaville

On February 16, a team of Canadian real estate developers announced a partnership with singer Jimmy Buffett’s Margaritaville Holdings Inc. to create a Buffett-branded “active adult” community, dubbed Latitude Margaritaville, in Daytona Beach, Florida. As the Orlando Business Journal reported, the scope of the nearly $1 billion project is vast: some 6,900 homes, along with 200,000-square-feet of retail, a band shell for live performances, and a free shuttle to the beach for the 55-and-up residents of this age-restricted retirement village.

“We are thrilled to be partnering with Margaritaville to put the exclamation point on fun living for active adults,” said Bill Bullock, senior vice president of developer Minto Communities, in a prepared statement.

The prospect of spending one’s golden years in a Jimmy-Buffettized tequila-cheeseburger haze may seem like a lifestyle with limited appeal, but do not underestimate the Parrothead planetary domination agenda. Buffett’s Margaritaville Holdings has managed to parlay the 70-year-old singer/songwriter’s 1977 hit into a business empire, with a growing network of restaurants, resorts, microbrews, cruises, and sundry lifestyle enhancements.

Senior living is a canny play, given the advancing age of the Parrothead Nation. And the model that Buffett and company are apparently pursuing, according to Senior Housing News, is an ambitious one: Latitude Margaritaville aims to rival the Villages, the colossal planned gerotopia outside Orlando that stands as the world’s largest age-restricted community.

The Villages, a planned city of nearly 160,000 souls embedded in a Central Florida landscape ribboned with golf-cart highways, has long been an object of fascination: Its cultural attributes, racial and political homogeneity, and general weirdness has inspired stunt journalism, tabloid exposes, and a deeply researched pop-anthropology tome. A Buffett-centric variation on this blueprint might be interesting. The original already goes heavy on the cocktail lifestyle, but it comes with a side of hardcore conservatism: Villages voters break heavily for the GOP. (And, with 80 percent turnout, the development’s outdoor-bar-equipped town squares are de rigueur whistle stops for Republican candidates.) Politically, Margaritavillians might offer a more progressive counterweight to their neighbors to the west, as the nation’s eco-minded head-of-state has campaigned for Democrat candidates in the past.

But the real question looming in advance of the world’s first dad-rock-icon-branded planned city is: Who’s next? The Rolling Stones can’t tour forever, and it’s frankly surprising that more boomer idols haven’t dipped their business models into the senior living sector. I’m ready to put down my deposit to move into a cabinette in Led Zeppelinopolis, if the band’s lawyers can work out the details.

A demand for innovative senior new home options is growing. Silverado Homes has designed a unique, blending new home community at the site of a popular Eskaton Village. Residents appreciate a true “age in place” concept – from homeownership, to supportive services to full assisted living and memory care, if or when needed. 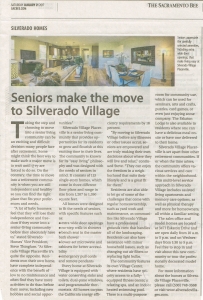